It dates back about 500 years back. There was a ruler named Hajo who defeated the Khens and ruled the westrn portion of Kamrup form 1510- 1587 A.D. The Kingdom of Hajo included western half of Assam, eastern half of Morung (Nepal, Terai) and the lands bounded on the east by Dhaneswari river, on the west by Konki river and in the North by Dalimkotte hills (formally in Bhutan, now in the District of Darjeeling, West Bengal) and on the south up to Ghoraghat (now in East Pakistan). This formed the boundary of Hajo kingdom at that time. 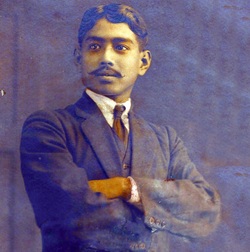 Hajo had two daughters, Hira and Jira. On the other side there was a small territory at Chikna Mountains situated between Sankosh/Saraldanga river and Champabati river about 50 miles north of Dhubri in present Goalapara district of Assam. This territory was ruled by Hadiya or Haridas Mondal. He belonged to Haihoi dynasty belonging to Mech caste.To establish unity wih Chikna, Hajo wedded off his daughters to Haridas. In due time Jira gave birth to Madan & Chandan while Hira gave birth to Sishu (Sisya Singha) & Bishu (Viswa Singha). (Sishu elder and Bisu younger). Gradually these four brothers mastered the art of war and started attacking & winning over the villages surrounding Chikna.Terror spread in occupying neighboring lands. On the run strife occurred with the Turukh Kotwal of that region. ” It is believed that the four brothers were charged for sacrificing one of their friends to the alter of Goddess Bhagwati. Fearing arrest they took shelter in the forest.” They collected soldiers, elephants & horses and pounded upon the Turukh Kotwal. Kotwal appeared with a big army.  Sisya Singha & Viswa Singha killed many.But Madan lost  his life in this battle.Being grieved, Viswa Singha along with Sisya Singha attacked severely. Viswa Singha caught the Kotwal’s horse and killed the Kotwal with his sword. Many Turukh soldiers were killed and the rest fled. Turning victorious, Viswa Singha enthroned Chandan, the younger brother of Madan, consoling Queen Jira who was hurt having lost her eldest son in the battle.

There is a story about the accession of Bisu Singh. After the marriage of Bisu Singh, the newly married wife went to Sishu to make customary obeisance. Sishu blessed her saying that she would be the queen consort. When  after  Chandan’s death preparation for the Coronation of Sishu, the eldest in the family was nearing completion, there Bisu’s  wife reminded him of his blessing. At this Sishu voluntarily abdicated and placed his younger brother Bisu on the throne. He then himself held the Royale Umbrella atop the crown, which was the duty of a vassal. On account of this great sacrifice Sishu was allowed to choose the Baikunthopur area to establish his kingdom and was made “RAIKUT” that is Commander in chief or the head man of the family and hereditary Chief Minister.

It has been seen that there was a kind of suppression for the flourish of the Raikuts during the years from 1947 to 1980 for the succession or the possession of the wealth, Even of today there are tons of cases pending in the the courts of Kolkatta.