Baikunthopur Raj Estate, was established by Sishu Singh after defeating the King of Bhutan and Gour in the year 1522 A.D. His capital was at first built in Siliaeguri (Siliguri) in the village of Dabgram within the present Raigunj (P.S Jalpaiguri). The Capital was called Niz-Baikunthopur. It was shifted to the present site in Jalpaiguri town by Jayanto Deb Raikut who ruled during the year 1793- 1800 and the big pond wich exits today near the palace was excavated at the time of Sarva Dev who ruled from 1800-1847 A.D. The contract for digging up  the pond was given to  Jion Gomasta Mohammedan from Dinajpur and a Rajbansi form Jalpaiguri and it is said that they were paid in Cowries (Counch Shell) and not in coins.

Baikunthopur Estate was not included in any Sarkar of Muslim division of the country. Although some accounts say that it transferred its allegiance to tem and agreed to pay a nominal tribute. This is said to have signed in 1682 at the time of Svja Khan. After the Battle of Plassey, the Dewani of Bengal, Bihar and Orisa came under East India Company in 1765. This estate was then temporarily included in the Dewani and was placed under Rangpur District and received the benefit of permanent settlement. 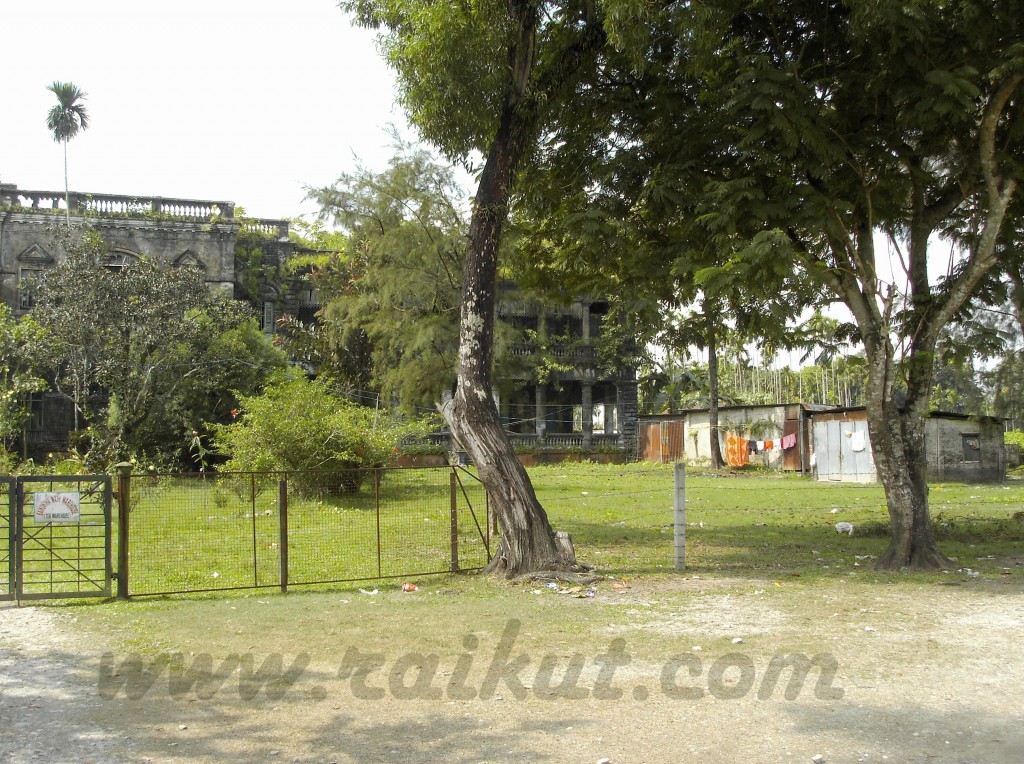 The Raikut family is descended from the Koch dynasty, who took control of the Kamata Kingdom in 1515. The family founder was Sishu Singha, elder brother of Vishu Singha, the second Koch Maharajah. At Vishu Singha’s coronation in 1523, Sisya Singha held the royal umbrella atop the crown, a sign of vassalage. Sisya Singha was given the title “Raikut” or “family guardian”, and his descendants were hereditary prime ministers of the Koch Bihar successor state to the Kamata kingdom. They were given the land of Baikunthopur in the present Jalpaiguri district of West Bengal.

On the death of Maharajah Madan Narayan of Koch Bihar in 1680, with no immediate successor, Koch Bihar was attacked by the Bhutan army. The Raikuts of Baikunthapur sent troops and helped force the Bhutia army to retreat. The Raikuts crowned Basudev Narayan (1680–1682 C.E.) as Maharajah and helped establish peace, before returning to their home. Two years later, the Bhutanese attacked again, captured the palace and massacred the royal family, including Basudev Narayan. The Raikuts Yogyadev and Bhujdev intervened again, defeating the invaders in a fierce battle on the banks of the Mansai river. The Raikuts then crowned Mahendra Narayan (1682–1693 C.E.), a five-year-old grandson of Pran Narayan, as the next Maharajah.

During the minority rule of Mahendra Narayan, Koch Bihar was unsettled. The lords of southern regions rejected Bihari rule, in place of direct tribute to the Mughal rulers as zamindars (landlords) of their territories. They accepted the authority of – and paid taxes to – Ibrahim Khan (ruler of Dhaka) and the Fauzdar of Ghoraghat. Even the Raikut princes of Baikunthopur and Pangar transferred loyalty to these powers, although perhaps only nominally. But from 1687 onwards, the Rajas of Baikunthopur and the Muslim rulers of Bengal repeatedly attacked Koch Bihar, now dominated by Bhutan.